Happy Easter & April Fools’! (The topic of this month’s newsletter is serious but a lot of it fun too so please read on!)

Knowledge is Wealth! So would be a crystal ball, especially one that could predict the ramifications of the US administration’s last week announcement of slapping $60B in tariffs on Chinese products (just to start). One might wonder how this could possibly affect real estate in Hawaii. For those of you who have followed my newsletters, we have learned how interest rates, T-Bill yields, inflation, exchange rates and various other economic factors can affect the real estate market in general and here in Hawaii in particular. We can now add world trade and the health of it thereof as another important factor – the crux and main topic of this month’s Hawaii Damon Newsletter. As little as maybe just 30 years ago, arguments could be made that a trade spat between US & China (or Europe, Japan etc.) would have very little affect on our real estate market here in Hawaii. However, with a world so fundamentally integrated into an almost one world economy, a malignant ripple on the shores of China, Europe or the US & Japan could turn into a world tsunami of catastrophic economic proportions or – vice-a-versa – a good economic wave could be ridden by all countries worldwide thru a tube of overall prosperity, economic growth and, yes, – especially in Hawaii– it could affect the real estate market. As this is the Happy Easter & April Fool’s issue of the Hawaii Damon newsletter we will look at both the best case scenario result of the trade dispute (the Happy Easter version which produces economic benefits) along with what could be the worst case scenario and fallout – all the while hoping the latter will just turn out to be an April Fools’ prank!

Let’s have a quick review of the heart of the matter and what the US grievances are and the administration’s said reason behind the $60B in tarriffs. In summary: (In a deja-vu way the grievances are very similar to the US-Japan friction in the not so distant past)

To China’s defense and it’s own excuse for its current trade surpluses with the rest of the world, MOFCOM/Ministers have stated that the US and the World does not manufacture much that its consumers want to buy (a rather absurd excuse and the US is saying it wants to take their ball and go home now). On the other hand the much more admirable and argument would be that China needs to catch up with the US, Europe and Japan and thus should be forgiven pursuing its somewhat adolescent – above mentioned – behavior until now.

What China Imports from the US(click to enlarge)

What the US Imports from China (click to enlarge)

What could be the fallout of the worst case scenario trade war with China? With 53% of the imports of toys coming from China (see graph above), I am sure my 6 year old would do anything to avoid such a conflagration!:) Seriously, and let’s also keep in mind that trade deficits are accompanied by current account surpluses (in this case money flowing back in to the US much of it used to purchase US T-Bills (10 year treasuries etc. that I have talked about in previous newsletters). Many Economists would argue that in the case of the US trade deficits (imports larger than exports) and current account surpluses (inflow of capital higher than outflow), they reflect a healthy and growing economy hungry for capital as opposed to older and slower growing mature economies. My own opinion falls somewhere between the two camps (that trade deficits reflect a vibrant economy on one hand and on the other they reflect some unfair trade practices). An adolescent can be forgiven but at some point needs to join with the with the rest of the adults in the room and be held more responsible. China is probably at that point now. We should do our best to embrace and encourage more responsibility. Could some tough love give the best results? 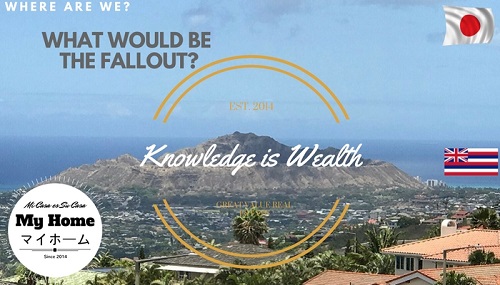 Before talking about tough love let’s briefly see how the worst case trade war – and hopefully our April Fools’ scenario  – plays out:

The US Side of the Economic Pain Equation

In the above doomsday scenario (which we hope to be the April Fools’ Day outcome) inflation would double in 2019 and unemployment would reach 10% and beyond shortly thereafter. The US experiences a particular nasty case of the 70s style stagflation influenza – hard times for just about everyone. Stock markets would get stuck in a prolonged bear market. How about the Economic Pain Felt in China? It would experience just as much and similar pain as the US. The Yuan would at first spike effectively killing their export markets. In addition a large % of the over 1B Chinese citizens who have just recently crossed past the poverty threshold/barrier to middle class will be thrown back into economic despair most likely leading to rioting in the streets. Chinese style tofu (mostly made from US Soybeans) would give sticker shock to most Chinese consumers – leave them wishing for a good April Fools’ too.How about the Economic Pain in the rest of the World? As mentioned above, the world now is so undivorceably connected, economic demand and supply lines would be disrupted in almost every country on the planet.  A US-China trade war would fling us all into an economic black hole tantamount to living in the middle ages, clambering to crawl out of the cave back into a fiscal and trade renaissance of the latter day.How about the Economic Pain felt by residents in Hawaii? Hawaii would no doubt feel – for the most part – the same as the US except for two very important aspects. First and most importantly at least we will all be suffering in paradise:)! (Surfers would just hope they didn’t break any boards). Realtors will no doubt be rioting on the streets of Honolulu as the real estate market grinds to a halt in our beautiful Hawaii (the exception may be the Japanese speaking realtors who may do OK, more on this below). US produced Wine, Beer, Ale and Spirits will be completely sold out at Costco.What could possibly be Japan’s Role in this World Trade War especially here in Hawaii as Japanese citizens are by far the biggest foreign buyers of Hawaii Real Estate? The Japanese Yen and specifically the strength there of would play an over-sized Sumo role. First, let’s have a look at the 2017 statistics of foreign buyers of Hawaii property courtesy of Title Guarantee: (click to enlarge) 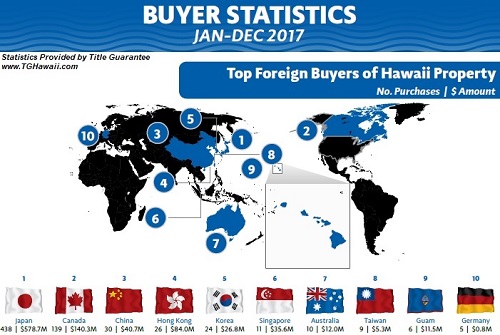 The total adds up to nearly $1B ($966M to be exact). Of this amount $578M of it or, nearly 60% of the foreign buyers of Hawaii Real Estate – were Japanese citizens (Note that this is about 15 times more than China thus the latter not playing much of a factor in the real estate prices in Hawaii, Canada ranks second after Japan at $140M). What is really interesting and what we are observing now is that the Japanese Yen is steadily becoming a world safe-haven currency (perhaps similar to the role the Swiss Franc played at the end of the 20th century). The latest exchange rate is now 106 Yen to 1US$ and strengthening (I predicted it would reach 108 in previous 2017 newsletters so it has now surpassed that level). With a full blown world trade war the Yen could reach 50 Yen to US$1 as demand increases for the Yen as the world’s safe haven currency. Real Estate in general and for those holding Japanese Yen – Japanese corporations and many citizens flush with cash with some of the highest savings rates in the world – would be on a fire sale including here in Hawaii. Diamond Head’s name would be officially changed to “Daya San.” If you were thinking about marrying a Japanese (speaking) realtor I highly recommend you should just do it now and, sorry, I am already married:(!

April Fools’! (Hopefully) Take Away – Please note that a lot of what was described above is based on speculation that what this administration and China is doing – blustering, posturing and (hopefully) blowing a lot of hot air – is simply a pedantic game of chicken that will inevitably not end up in a crash. Both sides know the stakes are way too high to risk it (the Cold War was a relatively peaceful period because of the known mutual destruction as a result of any aggression by either side). Unfortunately the economic theory of what would happen if this trade war game of chicken really did end up in a big-bang (black hole pun intended) smash-up – is not (speculation).

Regardless, the Yen could continue to strengthen to a degree even in the best and most likely scenario (no trade war) thus sales of luxury condos in Kakaako so popular with Japanese foreign buyers should continue at a good pace in 2018. We should also (assuming no trade war) see this One World Economy’s countries continue to grow and prosper leading to more tourism and overall economic growth in Hawaii too. The crystal ball (serious one) also sees the continuing of the shrinking of luxury single family home real estate inventories (albeit at a slow pace) though still squarely entrenched a Buyers’ market for 2018. Also, mortgage interest rates will increase (albeit at a slow pace) thus cooling the hot median home market in Hawaii though still continuing to be in a Sellers’ market in 2018. Hawaii Kai properties – with all public schools having now converted to the IB (International Baccalaureate) system – will show healthy demand especially in the just below luxury home categories (below $1.9M).  The topic of last month’s newsletter was schools on Oahu and in particular the IB School System (and its possible affect on Real Estate in Hawaii Kai). You can read about it here.

Conclusion – It could still possibly be a good time to marry a Japanese (speaking) realtor!

Finally, if you are currently in a median neighborhood in Hawaii (Sellers’ Market) and are thinking of trading up to a luxury neighborhood (Buyers’ Market), it does not get any better than this. If you are an off-shore buyer, Hawaii is an investment paradise. If you are a first time home Buyer interest rates are still very good. If you have any questions regarding real estate strategy please do not hesitate to contact me as it would be my pleasure to serve you in your Hawaii Real Estate needs. Please pass this newsletter along to any friends and family or they/you can sign (them) up here.