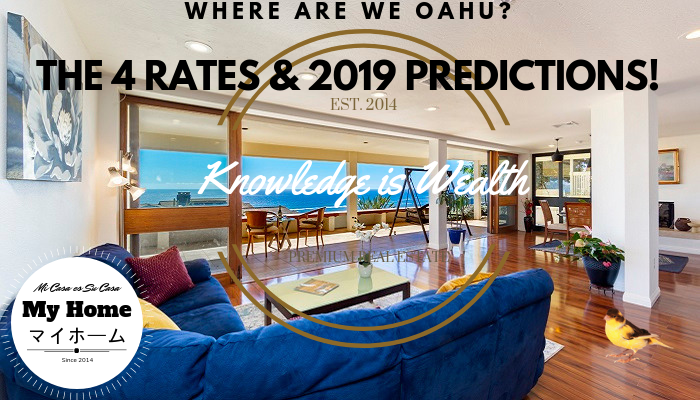 As mentioned in the above main article, so would be beforehand knowledge of the 4 Rates that can both create and moderate wealth. These rates are  Interest Rates, GDP Growth Rates, Inflation Rates and – especially important in Hawaii – Exchange Rates. In this article the 4 Rates will all be addressed in conjunction with predictions for 2019 that could affect the Real Estate Market here in Hawaii (I’ll try to make it short but sweet with a funny YouTube video at the end). As emphasized before, I am an Economist and Realtor at heart and the intention of my newsletters is to provide advice, tips and tools for both Buyers and Sellers of Hawaii Real Estate to make informed and educated decisions in conjunction with their accountants and financial advisors advice.* My articles specifically do not purport any political affiliation nor do they intend to be, generally, critical of any specific policies of political parties. As an Economist and Realtor, I simply try to predict the outcomes of any such said policies and how they may affect Real Estate in Hawaii. Let’s quickly and briefly visit the 4 Rates:

Interest Rates – I specifically mean the Fed Funds rate (medium to long term it is positively correlated to home mortgage rates). When the short-term interest rates (US 2-year treasury yield) become higher than the long-term rates (US 10-year treasury yield) it is considered an “Inverted Yield Curve.” This is not normal and the cause of it is when investors of these treasuries are pessimistic about the short-term prospects for the economy. The gap is now at its lowest in 11 years which the Wall Street Journal has called a “red flag.” In the graph below courtesy of FRED you can see where in 2001 the yield inversion occurred (dropped below the “0” line depicted below) which heralded a recession (gray shaded bar). Likewise, the curve in 2007 also inverted and we all know what happened shortly thereafter in 2008. Currently in 2019 now the gap is reaching “0” again.

Growth Rates – Specifically I am talking about the GDP growth. The real growth rate (after inflation) was 3.4% for the 3rd quarter of 2018 (4th quarter % not out yet because of the government shut-down). This is good news somewhat offsetting the pessimism mentioned above towards and inverted yield curve. However, it is predicted by many Economists that the US will slow down to the 2% range for 2019 (still not bad and nowhere near a recession – yet).

Inflation Rates – It fell to 2.2% in November, it’s lowest since February. In times of economic expansion, some inflation is considered good (2 – 3%). The trend though is downward along with the Growth Rates mentioned above.

Exchange Rates – Why is this important for Real Estate in Hawaii? Japan and our Japanese friends are by far the biggest foreign investors of real estate in Hawaii (bigger than the combined 2nd thru 10th place countries). When the US$ falls, the Japanese Yen (along with Gold and precious metals) rise in value making Hawaii Real Estate for Japanese go “on sale.” In the last month the US$/Yen exchange rate has fallen from 113 to about 108 (meaning the Yen is getting stronger which usually translates to higher demand for Hawaii Real Estate from Japanese investors).

1) Federal Reserve raises the Fed Funds interest rate just 2 more times (and maybe one more in 2020) for a total of 3 increases for this economic cycle.

2) If a Trade Deal with China happens in the first half of 2019 (averting a continued Trade War) then the US Economy, Stock Market, Inflation, US$ strength – all steam ahead in 2019. Next Economic contraction (recession) will not happen until end of 2020.

3) If a Trade Deal with China does not happen in the first half of 2019 then the US Economy slows quicker, Stock Market turns Bear, Inflation drops while the US$ gets weaker and the Yen continues to strengthen. Next Economic contraction (recession) will happen first half of 2020.

4) Regardless of 2 or 3 above, the next recession will be considered very mild.

6) The Yen will strengthen, the timing of which will coincide with either scenario 2 or 3 above. As a result, Hawaii Real Estate demand from Japanese will increase – especially for luxury condos.

7) President Trump will be a 1 Term President. Democrats will try to impeach him in 2019. They will lose that battle but win a bigger one by eventually taking the Senate.

8) The “Wall” does not get built (I will chime in to give my personal opinion here having spent a considerable amount of time near the US-Mexico border growing up in San Diego and actually crossing it many times. The “Wall” would be a huge waste of taxpayer money. Closer economic ties with Mexico has slowed illegal immigration of actual Mexicans to the US to a trickle. More cooperation and deeper economic-business ties with Mexico is what is needed. Help in securing Mexico’s Southern border would pay off 10 fold compared to any “Wall” straddling the US-Mexico border. Can anyone say “bigger ladder” or “deeper and longer tunnel”??? – Democrat or Republican, please urge your representative to say “No” to the wall.)

9) There is no doubt President Trump will lose significant support from especially the Republican women that supported him in the first place. It will impact his candidacy for a second term leading to a 1 term presidency for Trump.

10) Trump’s 1 Term Legacy will be lauded for at least having skillfully dealt with China’s unfair beggar-thy-neighbor trade policies. It will also be remembered, in general, for negotiating better deals with other countries. Because of Trump, future candidates’ business experience will carry more weight for future elections.

*Disclaimer: Any opinions expressed in this newsletter are that of Damon Rhys only and do not necessarily reflect the views of his brokerage firm, Sachi Hawaii Pacific Century Properties. Though knowledgeable including Management Science / Quantitative Economic Decision Science & Master (MPIA) Degrees from the University of California, Damon Rhys is a licensed Realtor in the state of Hawaii. He is not a licensed Financial Advisor. For any specific investment decisions, it is advised that one consults with a licensed financial advisor.